Henry William Allingham (6 June 1896 – 18 July 2009) was a World War I veteran and a validated supercentenarian who was the oldest validated living man in the world from Tomoji Tanabe's death to his own, a month later. He also holds the record of being the oldest British man ever.

Allingham was born in Clapton, County of London, England, UK on 6 June 1896. When he was 14 months old, his father, Henry Thomas Allingham, died at age 29 of tuberculosis (in 1897). Henry is recorded in the 1901 census with his widowed mother Amy Jane Allingham (née Foster), a laundress forewoman, living with her parents and brother at 23 Verulam Avenue, Walthamstow. His mother remarried in 1905 to Hubert George Higgs and in 1907 the family moved to Clapham, London. Henry and his mother are recorded in the 1911 Census living at 21 Heyford Avenue, Lambeth, while his stepfather was lodging away from home working as a wheelwright. Henry attended a London County Council school before attending the Regent Street Polytechnic. Allingham remembered seeing the City Imperial Volunteers return from the Second Boer War, and also recalled watching W. G. Grace play cricket. On leaving school, Allingham started work as a trainee surgical instrument maker at St. Bartholomew's Hospital. He did not find this job very interesting, and so left to work for a coachbuilder specialising in car bodies.

Allingham's funeral took place at St Nicholas' Church, Brighton at noon on 30 July 2009, with full military honours. His coffin was carried by three Royal Navy seamen and three RAF airmen. The service was preceded by a half-muffled quarter peal on the church's bells, rung by local ringers and members of the RAF and Royal Navy change ringing associations. Among the mourners were the Duchess of Gloucester, representing the Queen, and Veterans' Minister Kevan Jones. Senior Royal Navy and Royal Air Force officers, including Vice-Admiral Sir Adrian Johns and Air Vice-Marshal Peter Dye, represented the two services of which Allingham had been a member. Allingham's surviving daughter, Betty Hankin, 89, attended the funeral, with several members of her family. The funeral was followed by a flypast of five replica First World War aircraft; British and French buglers played the Last Post and Reveille; and a bell was tolled 113 times, once for each year of his life.

The BBC commissioned Carol Ann Duffy, the Poet Laureate, to write a poem to mark the deaths of Allingham and Harry Patch, who died one week after Allingham on 25 July 2009. The result, Last Post, was read by Duffy on the BBC Radio 4 programme Today on the day of Allingham's funeral. A tree was planted, and a commemorative plaque unveiled, at the Eastbourne Redoubt on 22 May 2010 to mark Allingham's residence in the town.

Henry Allingham as a child.

Henry Allingham with his wife. 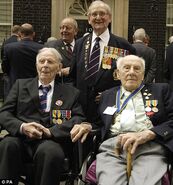