Henya Rabinov (Russian: Геня Рабинов; 2 April 1910 – 30 January 2021) was a Belarusian-born Israeli supercentenarian whose age is currently unvalidated by the Gerontology Research Group (GRG). At the time of her death, she was the oldest known living person in Israel.

Henya Rabinov was born in Pinsk, Russian Empire (now Belarus) on 2 April 1910. Her father was a wealthy entrepreneur who owned a hotel and shops. She married and had at lest one son: Amnon (aged 76 in April 2020).

At the age of 21, she moved with her husband to Paris, France. She moved to Mandatory Palestine (present-day Israel), before the World War II. Her husband died around 1980.

In April 2020, she celebrated her 110th birthday. At that time, she had two grandchildren and five great-grandchildren. 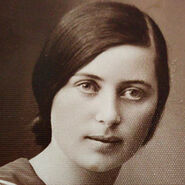