Hilda Brown (20 January 1911 – 22 June 2021) was a Canadian-born American supercentenarian who is one of the oldest known survivors of COVID-19, having successfully recovered from the disease at the age of 109. Her age is currently unvalidated by the Gerontology Research Group.

Brown was born in Newfoundland, Canada on 20 January 1911. She was one of 10 children. When she was eight years old, her mother died aged 35. Growing up, she played the organ at her hometown Baptist church. Brown claims that, as a teenager in May 1927, she witnessed Charles Lindbergh’s Spirit of St. Louis flying over Musgravetown, Newfoundland on his way to completing the first solo transatlantic flight.

In her 30s, Brown emigrated to the United States, settling in Fort Lee, New Jersey. She worked as a waitress for four decades before retiring to Ocean County, New Jersey. She also travelled the the world as a church missionary, and crocheted scarfs, hats, and blankets for those in need.

Since 1980, Brown has been a resident of the Bayville section of Berkeley, New Jersey. She moved into a care home in around 2014. Brown drove a car until the age of 93 and walked until 103, but has since used a wheelchair. At the time of her 109th birthday in 2020, it was reported that she is hard of hearing.

In November 2020, Brown contracted COVID-19 during the coronavirus pandemic. After testing positive for the virus, she was moved to a quarantine floor. Although initially she did not show any symptoms, her oxygen level later dropped, and she was kept on supplemental oxygen for about a month. She eventually moved back to her room after showing signs of improvement.

Brown as a younger woman 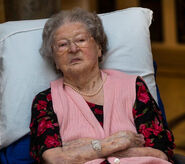 Brown receiving a vaccination against COVID-19 on 19 January 2021, the day before her 110th birthday 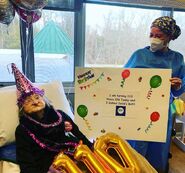