Hilda May Clulow (née Heath; 15 March 1908 – 24 December 2019) was a British supercentenarian who was the oldest living person in the United Kingdom at the time of her death. Her age is currently unvalidated by the Gerontology Research Group (GRG).

Clulow was born in Selly Park, a suburb of Birmingham, England, on 15 March 1908. She was the third of six children. At the age of 16, she started working in a factory as a dressmaker, and her friends and neighbours would supply her with dressmaking materials.

Clulow married her husband, Arthur Clulow, in 1937. and had an unreported number of children with him. The couple enjoyed riding on their tandem together and going on holiday to Blackpool and Cornwall.

Clulow retired at the age of 60. In her later years, she moved into a care home in Redditch, Worcestershire, England. She celebrated her 110th birthday in March 2018 with the staff and other residents of her care home, and the Mayor of her borough paid her a visit. At the time, she had six great-grandchildren.

Clulow became the oldest living person in the United Kingdom following the death of 112-year-old Gwen Payne on 15 October 2019. Clulow died on 24 December 2019 at the age of 111 years, 284 days. Following her death, Joan Hocquard and Bob Weighton jointly shared the title of the UK's oldest living person. 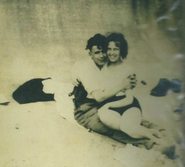 Hilda Clulow with her husband Arthur.

Hilda Clulow (left) with a friend.

Hilda Clulow on her 111th birthday.