Huang Decheng [Traditional Chinese: 黃德成] (born 14 November 1913 (claims 1912)) is a Taiwanese centenarian who is one of the oldest World War II veterans.

During World War II, Huang was forced to become a soldier by the Japanese government. He served in Nanyang, Philippines from 1943 to 1945. He had to look after a warehouse. Because of the lack of food, not everyone can eat his fill, but the guard of the warehouse prevented him from starving to death.

One day, one of his colleagues stole candies, and was found by the Japanese soldiers. However, Huang managed to hide his colleague, saving his life.

In June 2010, at the age of 96 (claims 97), he was reported to be the oldest neighbourhood chief in Taiwan; he practises this function since around 1976. At the age of 100, he was able to walk a kilometer to buy vegetables, and was still climbing the trees to trim them.

In October 2016, at the age of 102 (claims 103), Huang was visited by Zhang Huaguan [Traditional Chinese: 長張花], the magistrate of Chiayi County. He said the secret of his longevity is to not being demanding when eating, to eat both meat and vegetables, but to eat at 70%; it's also to walk and to exercise every day.

In October 2020, Huang was reported to be the second-oldest living person in Chiayi County. He was visited by the president of Taiwan, Tsai Ing-wen. At the beginning of 2021, he fainted for unknown reasons, and his doctor diagnosed him a brain injury. However, he refused to underwent surgery.

In November 2021, Huang celebrated his 108th birthday (claimed 109th birthday; claimed East Asian 110th birthday) with his family. On 1 January 2022 (the 111th year of the Republic of China), he assisted to the inauguration of the new Shuishang Township office. At the time, he was reported to be the oldest living person in Shuishang Township, and in whole Chiayi County. 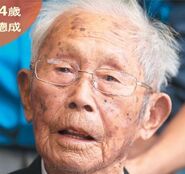