Keeling was born in Harlem, New York, USA on 15 May 1915. Her mother died when Ida was young and her husband died of a heart attack when she was 42. She had four children, two of whom, Charles and Donald, died in drug-related killings in 1978 and 1980 respectively. Her eldest daughter, Laura, worked as the CEO of two Urban League affiliates. Her youngest daughter, Shelley, is a lawyer and real estate investor who also coached for a local high school. Shelley also coached her mother and first convinced her to run in a "mini-run" at the age of 67.

Ida Keeling as a young woman. 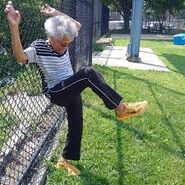