Inah Canabarro Lucas was born in Sao Francisco de Assis, Rio Grande do Sul, Brazil on 8 June 1908 (claims 27 May) to parents Joao Antonio Lucas and Mariana Canabarro Lucas. As a child, she was so skinny that many people didn't think she would live past the age of seven. She is the great-granddaughter of General David Canabarro. Her father died in combat in 1923.

She became the oldest known living nun in Brazil, following the death of Luzia Mohrs on 16 October 2017.

At the age of 110, she has some mobility difficulties and has to walk with a walker. She credits her longevity to God.

On 25 January 2021 at the age of 112, she received her first dose of Covid-19 vaccine, making her one of oldest people to receive the COVID-19 vaccine.

On 2 January 2022, at the age of 113 years, 208 days, she surpassed the age of Luzia Mohrs, becoming the oldest Brazilian ecclesiastical person ever.

She became the oldest validated living person in Brazil, following the death of Antonia da Santa Cruz on 23 January 2022.

She became the oldest validated living person in Latin America, following the death of Sofia Rojas of Colombia on 30 July 2022.

Canabarro Lucas currently lives in Porto Alegre, Rio Grande do Sul, Brazil, at the age of 114 years, 61 days (claims 114 years, 73 days). She is currently the second-oldest validated living nun in the world, behind Lucile Randon.

As a young girl (second from right) 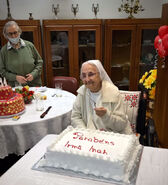