Iris C. Westman (28 August 1905 – 3 January 2021) was an American supercentenarian who, at the time of her death, was the second-oldest living person in the United States whose age has been validated by the Gerontology Research Group (GRG), behind Hester Ford. At the age of 115 years, 128 days, Westman holds the record as the longest-lived validated person ever from the US state of North Dakota.

Iris Westman was born in Aneta, North Dakota, USA on 28 August 1905 to Nicholas Westman and Mathilda Erickson. She had three brothers and was the only daughter in her family to survive to adulthood, as her two sisters died as children. Westman recalls helping her mother knit for the troops during the First World War.

Westman graduated from Aneta High School in 1923, and then graduated from the University of North Dakota in 1928. She was an English teacher in both Aneta and Hillsboro, North Dakota, before moving to Minnesota. In the 1940s, she spent two summers at the University of Minnesota to earn a Master of Library Sciences degree. She became a librarian in Worthington, Minnesota, where she also sang in the First Lutheran Church choir.

Westman never married or had children. She retired from being a librarian in 1972, and returned to North Dakota in 1990. At the age of 106, she suffered a bad fall and underwent hip replacement surgery. She subsequently moved in to a nursing home in Northwood, North Dakota, about 25 miles from the farm she grew up on. As of 2018, she still owned and rented out some of the farmland.

At the time of her 113th birthday in 2018, Westman was still able to get around with the help of a walker and was reportedly in good health. In 2020, Westman's 115th birthday was celebrated with a drive-by parade outside her nursing home; visitors were forced to keep at a distance due to the COVID-19 pandemic. She died in Northwood, North Dakota, USA on 3 January 2021 at the age of 115 years, 128 days. She was the first validated supercentenarian death of 2021.

It is not clear when Westman became the oldest living person in North Dakota, but it is believed to have been before she turned 110. On 29 October 2016, Westman officially became the oldest person ever recorded from North Dakota after surpassing the previous record of 111 years, 61 days set by Mary Schumacher.

At the time of her death, Westman was the second-oldest living person in the United States, behind Hester Ford and the seventh-oldest living person in the world, behind Kane Tanaka, Lucile Randon, Francisca Celsa dos Santos, Jeanne Bot, Shigeyo Nakachi, and Hester Ford (whose age has been validated by the GRG). In 2020, she entered the top-20 oldest validated Americans, as well as the worldwide top-50 oldest validated people, of all-time.

Westman at the age of 3.

Westman as a young girl (middle).

Westman (centre) with her mother and brothers

Westman at the age of 23, after graduating from the University of North Dakota.

Westman as a young woman.

Westman as a young woman.

Westman as a young woman, pictured with her pet dog 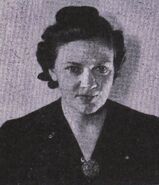 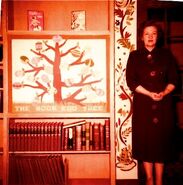 Westman in August 2016, shortly before her 111th birthday

Westman at the age of 114 with her great-great-great nephew.