Irmgard von Stephani (20 September 1895 – 5 October 2007) was a German supercentenarian whose age has been validated by Gerontology Research Group (GRG), she has been also the oldest living person in Germany since the death of Frieda Muller on 21 July 2005, until her death on 5 October 2007.

Irmgard Von Stephani was born in Kassel and spent her youth in Celle together with her mother and sister after the passing of her father, a civil servant. In 1915, she moved to Berlin. She never married or had children and she started working as a housekeeper and nanny. She moved to Lankwitz around 1930 where she was living for another seven decades. In her 80s she inherited the mansion of her last employer but committed it to her relatives. She attributed her longevity to renouncing alcohol, cigarettes and being sportive. At the age of 111, Irmgard von Stephani lived on her own until May 2007. Thereafter, she moved into a nursing home where she spent her last months. Despite having trouble with her eyesight and hearing, she was able to walk when aided. 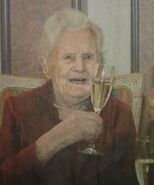