Ivy Irene Tate (née Cope; 19 August 1910 – 6 December 2021) was a British-born Australian supercentenarian whose age is currently unvalidated by the Gerontology Research Group (GRG). She may have been the oldest living person in Australia since the death of Dexter Kruger on 20 July 2021 until her death, if discounting the age of an anonymous woman whose age is questionable.

Tate was born as Ivy Irene Cope in London, England, UK, on 19 August 1910 as one of four children born to James and Daisy Cope. The family emigrated to Western Australia in 1921, settling in West Leederville and later Subiaco. She won a scholarship to Kay’s Commercial College, but her mother almost prevented her from attending due to financial difficulties.

Tate worked for a company that made hair-curling machines, as well as an estate agency. She met her future husband, Harry Tate, through her old friend Maude at the 1930 Perth Royal Show. They married in 1934 at St. Mary’s Church in West Perth and bought a cottage together not long after.

The Tates had two sons: Maurice (born 1938) and Robert (born 1943). Shortly after Robert’s birth, the family moved to Floreat, near Perth. In the 1960s, they built their own home, where Ivy lived until moving to an aged care facility in September 2018.

Tate was a founder member of the Floreat Croquet Club, and has been given an honorary life membership. Her other hobbies included dressmaking, cooking, tennis, floristry, and playing cards. Her favourite drinks are champagne and sherry, the latter of which she enjoyed in the evening. She celebrated her 110th birthday in August 2020, at which time, she was a great-grandmother of eight. 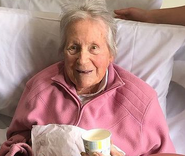 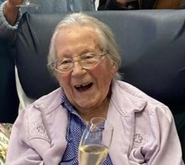