Jadwiga Szubartowicz (16 October 1905 – 20 July 2017) was a Polish supercentenarian who was the oldest recognized living person in Poland since the death of Jadwiga Mlynek of Kalisz until her own death. Mrs. Szubartowicz was a resident of Lublin, the capital city of Lublin Voivodeship.

Jadwiga Szubartowicz was born in Lublin, Russian Empire (now Lublin, Lublin Voivodeship, Poland). As a child, she lived in Sankt Petersburg together with her parents, sister and brother. There she witnessed the 1917 Russian revolution during which her father died. Along with the rest of her family, she returned to Poland. There she graduated from Ursuline sisters' gymnasium. Together with her sister, she completed 5 years of pedagogical studies and worked as an accountant in her adult life. She survived World War II in Lublin and memorizes the action of saving the famous Jan Matejko painting "Battle of Grunwald" from the Nazi occupants. Sadly, her brother was arrested in Kraków by Nazis and killed in Buchenwald concentration camp. After the war, Jadwiga married Antoni Szubartowicz who was a veteran of the battle of Monte Cassino. The couple didn't have children and they have been married for 50 years.

On 16 October 2015, Jadwiga Szubartowicz celebrated her 110th birthday. At the time of her birthday, Jadwiga Szubartowicz confessed that at the time she had been born, Lublin was a poor city in the East of Poland and now it is teeming with enthusiasm of the people living in it. Mrs. Szubartowicz said she can feel it despite not leaving her home anymore. Her mind remains lucid and she has a great memory. She keeps abreast of the events in her city, country and the world.

On the day of her 110th birthday, Mrs. Szubartowicz spoke her message to the world: "The life of a man on the Earth is neither easy nor light. One needs to educate, expand horizons and improve constantly. And, with the help of the God, search for good, beauty and truth. Break and vanquish the evil. That has always been my recipe for life."

On 8 March 2016, Jadwiga Szubartowicz was visited by Krzysztof Zuk, president of Lublin. On that occasion, she was granted with the title of Honorary Citizen of Lublin. Later that month, she was also visited by Stanislaw Budzik, archbishop of Lublin diocese. On 16 October 2016, Mrs. Szubartowicz celebrated her 111th birthday being one of only five people in the modern history of Poland to have eclipsed such a long lifespan. On the occasion of Polish Independence Day, she was visited by the Prime Minister of Lublin Voivodeship and recalled the historical event, during which she was 13 years old.

In April 2017, Jadwiga Szubartowicz was visited by Stanisław Budzik, archbishop of Lublin. Although she had only recently recovered from pneumonia, she was in good spirits and enjoyed a chat with the archbishop who told her about his recent visit to Belarus. 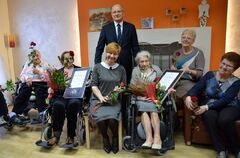 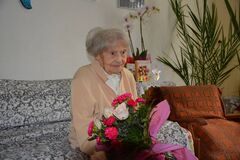 Jadwiga Szubartowicz at the age of 111.