James Clayton Flowers (born 25 December 1915) is an American centenarian who was a member of the famed group of World War II-era African-Americans known as the Tuskegee Airmen.

Flowers was born in Surry County, Virginia, USA on Christmas Day 1915. His parents were James Flowers and Lillie (née Clayton) Flowers. He had four siblings. His father lived to be 97 (almost 98).

During the World War II, he was a pilot with the 99th Fighter Squadron, 332nd Fighter Group for five years. He also was member of the Tuskegee Airmen.

Edwards worked as a school teacher in the New York School System. After retirement, he and his wife relocated to New Mexico. Evelyn died in 2008.

New Mexico held a ceremony to honor the Tuskegee Airmen in March 2014. Flowers was present for the dedication at the New Mexico Veterans' Memorial. He turned 100 on 25 December 2015.

Flowers currently lives at his home in Las Cruces, New Mexico, USA, at the age of 106 years, 28 days. 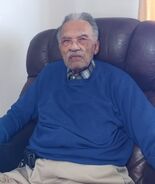 Flowers with his daughter Kathi Bayne