James Foster ​McCoubrey (13 September 1901 – 5 July 2013) was a validated Canadian-American supercentenarian. He was the oldest (known) living man born in the Americas.

James McCoubrey was born in St. John's, Newfoundland, Canada on 13 September 1901. His father, George Andrew McCoubrey, worked as a sea captain, and died from tuberculosis when James was just a toddler. In his early years, he lived with his aunt Mary Foster in Halifax, Nova Scotia, before moving back with his mother aged 8, where she lived in Cambridge, Massachusetts. In 1910, his mother, Jennie Isabel Foster, married James Hicks, making the young McCoubrey an American citizen.

McCoubrey attended school until the eighth grade, before he began working to support his family, although he later began taking high school classes at night to gain his diploma. He enlisted to serve in World War 1, but as he was underaged, his mother refused to allow him to fight. As an adult, he worked with various companies selling insurance, and later started his own business selling motorcycle insurance. From the late 1920s until his retirement in 1965, McCoubrey owned an oil burner business called Clifco Heat.

McCoubrey met his wife, Rose Helga Aurora Nordbeck, at a canoe club on the Charles River in Boston, and married her in 1923. James, an early motorcycle enthusiast, celebrated his honeymoon by taking Rose for a ride in a Harley Davidson, driving as his bride sat in the sidecar. Their only child, Patricia, was born in 1929. The couple were married for nearly 70 years before Rose's death in 1992 at the age of 90. After becoming widowed, he moved in with his daughter and son-in-law, where he would remain for the remaining 20 years of his life.

Shortly after the passing of his wife, McCoubrey purchased his first computer at the age of 93, and learned how to surf the internet, where he would often talk with other seniors over chat rooms. He continued to use the computer well into his centenarian years, and regularly responded to emails until a few years before his death. At the time of his 111th birthday in 2012, he was still in remarkably good shape for his age, being able to walk around his home unassisted, and did daily chores, including making his bed in the morning, and only required a cane for walking down the stairs. However, he suffered from sight and hearing loss in his later years, which forced him to give up his hobbies of reading and using the computer. His advanced age came as a surprise to those who met him, as his mostly wrinkle-free skin and good health gave him the appearance of someone many decades younger.

On 23 May 2013, following the death of 113-year-old James Sisnett, he became the oldest known man born in the Americas.

He was thought to have been the oldest living man after the death of 116 year old Jiroemon Kimura on 12 June 2013 and held the title until his death from pneumonia on 5 July 2013; however, the validation of Salustiano Sanchez has proved McCoubrey never was the oldest living man in the world nor in the United States. He is the oldest validated man ever born in Canada.[1] 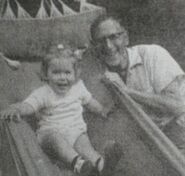 McCoubrey in his earlier years.

McCoubrey celebrating his 108th birthday in 2009.