James William Wiggins (15 October 1879 – 16 October 1991) was a validated American supercentenarian. He is the oldest validated man ever who died in the US state of Arkansas.

James Wiggins was born in a log cabin in Arkansas, USA on 15 October 1879. His parents were William, a Civil War veteran, and Barbara Wiggins. James had 6 other siblings.

On 18 March 1905, he married Mamie Lane. He worked as a farmer. He enlisted in the U.S. Army during both world wars. He later remarried, this time to Molly Hill. At age 100, he was still physically able to chop wood. He became bedridden at age 109, but was still relatively healthy. A newspaper article from November 1989 reported that James was living with his daughter Rosetta in Lee County, Arkansas, since 20 years.

James Wiggins died in Arkansas on 16 October 1991, a day after his 112th birthday. He was succeeded as the World's Oldest Man by Frederick Frazier. 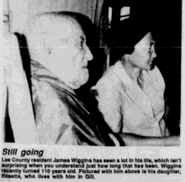