Reyskens was born in Genk, Limburg, Belgium on 11 May 1878. After both of Reyskens' parents died when he was just a child, he went to live with a stepfather for the remaining years of his childhood. In 1897, Reyskens did military service. Soon afterwards, he left Genk and travelled gradually through Belgium, living briefly in Bilzen, Herstal, Charleroi and Brussels. Reyskens went on foot to the Netherlands, and settled in Eindhoven, where he married and had two children. In 1917, he settled his family in Dordrecht, where he was to live for the rest of his life. Reyskens worked in the local plastics factory until 1947, when he retired at the age of 69. By this time, both his children had emigrated to Australia and his wife died in 1964. Reyskens continued to live alone until 1977, when a heart attack forced him to move into Huize Avondzon, a retirement home of the Salvation Army. Reyskens remained mentally alert and in fairly good physical shape until a week before his death over 12 years later, moving freely with the use of a cane. 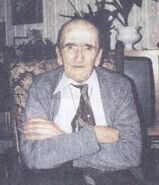