Ising was born in Berlin, Germany, on 2 February 1902. She studied economics at the Frederick William University in Berlin. In 1926, Ising wrote a thesis on "The problem of unemployment in England after 1920, and received a doctorate degree.[1] She married Ernst Ising on 23 December 1930. The married couple lived in Caputh, Brandenburg, next to the famous summer residence of the Einstein family. In 1938, the Jewish boarding school in Caputh, where the Isings worked, was devastated by the Nazis.[2] The following year, the Isings emigrated to Luxembourg. After the German Wehrmacht occupied Luxembourg, Jane's husband was forced to work in the army. The same year, Jane gave birth to their son Tom in Luxembourg. In 1947, Ising emigrated to the United States, settling down in Peoria, Illinois in 1949, teaching economics and German in the public school system and Bradley University. She moved to Matteson, Illinois in 2007. 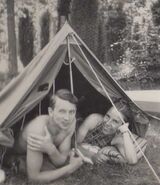 Jane Ising and her husband Ernst Ising during a camping trip down the Danube River in 1938.

Jane and Ernest Ising in Peoria, Illinois in March 1996.

Jane Ising on her 108th birthday.

Jane Ising on her 109th birthday.