Janet Isabella Mackay (26 March 1910 – February 2021) was a British supercentenarian who was the oldest living person in Scotland at time of her death. Her age is currently unvalidated by the Gerontology Research Group (GRG).

Mackay was born near Jedburgh in the Scottish Borders region of Scotland, UK, on 26 March 1910. She came from a farming family and moved around a lot when she was younger. She married Alistair Mackay in 1935 while living in Dalmahoy, Edinburgh. A year later, she gave birth to their eldest son, Sandy.

The family moved first to Carrick Knowe, a suburb in the west of Edinburgh, and then to West Lothian. Before the Second World War, Mackay worked as a nanny, but during the war she became an insurance agent. After the war, she and her husband had another son, Donald.

In 2013, Mackay moved to a nursing home in Broxburn, West Lothian, Scotland, in order to be closer to her son, Donald. As of 2019, she has three grandchildren and seven great-grandchildren.

Mackay celebrated her 110th birthday in March 2020, but her family were not able to join her for the occasion because of the lockdown due to the COVID-19 pandemic. At the time, her son Donald reported that she has macular degeneration, is almost completely deaf, and has a form of dementia. 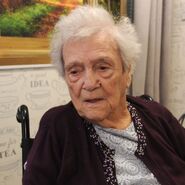 Mackay on her 108th birthday 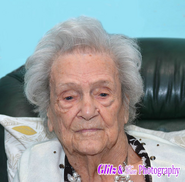 Mackay on her 109th birthday

Mackay on her 109th birthday