Janosne Ando (née Julianna Fejos) [Hungarian: Andó Jánosné Fejős Julianna] (10 December 1886 – 25 September 1994) was a Serbian-Hungarian centenarian. At the time of her death, she was to oldest living person in the country.

Julianna was born in Magyarkanizsa, Austria-Hungary (present-day Kanjiža, Serbia) on 10 December 1886. She was one of many siblings, therefore she was given to her aunt from her mother. She had hard times there, as her stepfather was an alcoholic and her stepmother forced her to do all the household chores.

The hardships ended when Julianna married to János Andó, who worked at the Hungarian State Railways. Together, they travelled a lot and visited many places across the country. In 1918, when the Serbians occupied her birth town, they moved to János’ parents in Salgótarján, where they lived in the kitchen. They moved to Hatvan in 1932, but János died a few years later.

Julianna had three children. Her son disappeared in WWII, she lost contact with one of his daughters because she did not get along with her son-in-law, and her other daughter, whom she lived with, died when Julianna was 100.

After her daughter’s death, Julianna moved to a care home in Hatvan. She was in exceptional mental condition as a centenarian, but she did not like to talk about the past, and she also became almost blind. She became the oldest living person in Hungary at the age of 106. She was the oldest voter during the 1994 Hungarian parliamentary election. 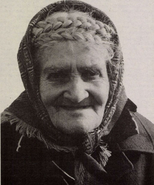 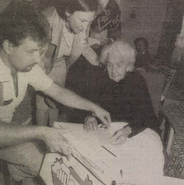