Janosne Kudasz (née Ilona Ray, later adopted as Guba) [Hungarian: Kudász Jánosné Guba Ilona) (27 April 1902 – 19 March 2013) was a Hungarian supercentenarian whose age is currently unvalidated by the Gerontology Research Group. She was the oldest living person in Hungary since 2010, and probably the oldest person ever to die in Hungary. Her age was later surpassed by Janosne Belik and Veronika Zsilinszki.

Janosne was born in Budapest, Austria-Hungary (now Hungary) on 27 April 1902 to Erzsébet Ray, who was an unmarried woman with French ancestors. She left the infant in the hospital. Ilona was adopted, she had 4 older step-siblings. When she was 12, her real mother got married so Ilona was forced to go back to her, though she loved her step-parents and didn't want to leave them.

After an argument with her mother, she moved to one of her female colleagues. She met János Kudász at a dance party and married him in 1925. They had a daughter, Klára, who died in 2008. During WWII, the family survived because Ilona could speak Russian and was treated well by Soviet soldiers. She worked at many various places, including a pasta factory. She got widowed in 1975.

She moved to the town of Törökbálint as a centenarian. She had a grandchild, 3 great-grandchildren, and 2 great-great-grandchildren – the first of them was born on her 99th birthday. She was very healthy in her centenarian years, she could read without glasses and she usually watched the news in the television. According to her, she lived to a long age because she mostly ate vegetables and pasta instead of meat. László Kövér, the then-president of Hungary visited her on her 110th birthday. 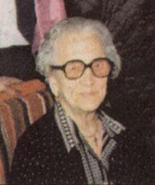