Janosne Szentirmay (née Terezia Kranixfeld) [Hungarian: Szentirmay Jánosné Kránixfeld Terézia] (4 November 1899 – c. 2 February 2009) was a Hungarian centenarian. At the time of her death, she was to oldest living person in the country.

Terézia (nicknamed Relly) was born on 4 November 1899, in Sopron, Austria-Hungary (present-day Hungary). She was the last living person who voted in the 1921 Sopron plebiscite. She graduated as a teacher in 1923, and taught in several schools. She was said to be a very strict teacher who could handle the students with the worst behaviour.

Terézia retired in 1954, at the age of 55. As a pensioner, her favourite hobbies were gardening and reading. She was a devoted Catholic, going to church alone even at age 99. She lived independently until the age of 100.

Terézia became the oldest living person in Hungary upon Lajosne Buzaky’s death in September 2007. Her health started to worsen in September 2008. She died on c. 2 February 2009, in Sopron, at the age of 109 years, c. 90 days. 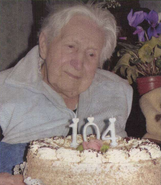 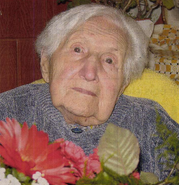