Jazeps Strods [Latvian: Jāzeps] (born 18 December 1914) is a Latvian centenarian who is currently the oldest known living man in Latvia.

Jazeps Strods was born in Russian Empire (present-day Latvia) on 18 December 1914. He had at least two brothers and one sister.

Before World War II, he worked at his parents' home in Strodi, after which he applied for a job as a railwayman in Nicgale, which allowed him to avoid serving in the army.

In the early 1980s, he married with a woman named Veronica. After the marriage, Strods moved to his wife's house in Rozkalni Parish, Preili Municipality. His wife died between February and June 2021.

As of December 2021, he lives alone and his health is deteriorating, but his neighbors and relatives helped him in his daily duties. 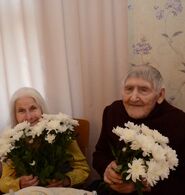