Jeanne Garnier was born as Jeanne Seguin in Ruaux, Vosges, Grand Est, France on 5 January 1911. She was the daughter of Marie Helene Seguin (1872–1949) and an unknown father. One of her half-brothers, Leon (born 1894), died during World War I.

In 1924, Garnier obtained her school certificate. Her parents hadn't enough money to pay her studies, so she began to work as a housekeeper in Vosges department. At age 18, she worked for Madam Quellenec in Paris, and met famous people like humorist Fernandel and singer Tino Rossi.

In 1952, Garnier gave birth to her only son, Christian. The couple decided to move to Paris in 1953. There, she worked as an auxiliary police officer, while her husband worked as a butler. She was widowed in 1993 after 58 years of marriage.

In 2008, Garnier moved to live with her son and her daughter-in-law. Until 2018, Garnier came back regularly to Menessaire. In September 2020, she moved into a nursing home.

Jeanne Garnier died in Ville d'Avray, Hauts-de-Seine, Ile-de-France, France on 14 November 2021 at the age of 110 years, 313 days. She was survived by her son, her daughter-in-law, two grandchildren and two great-grandchildren. At the time of her death, she was the second-oldest known living person in Ile-de-France, after Albertine Miton, and the oldest known living person in Hauts-de-Seine department. 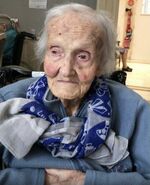 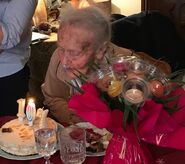