Jennie was born as Jane Chaplow in Carlisle, England, UK on 11 February 1845[1] as the daughter of James and Mary Chaplow. The family left for North America in 1859 and later came to Utah, USA. Jennie married Reese Howell in Wellsville, Utah in 1869 and moved with him to Kelton the following year. The couple had four children, all of which she outlived.

In 1886 the family moved to Ogden, where they ran a dry goods store. Reese Howell died in 1913 and Jennie later moved to Los Angeles, California to live with her children. The last years of her life she spent with a granddaughter. 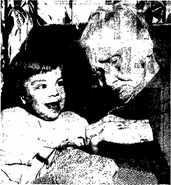