Jeralean L. Talley (née Kurtz; 23 May 1899 – 17 June 2015) was an American supercentenarian who was, at the age of 116 years, 25 days, the oldest living person in the world, and the oldest validated living American, orignally believed to have got the title upon the death of 113-year-old Elsie Thompson on 21 March 2013. However, on 4 July 2014, Gertrude Weaver was confirmed to be older; Talley became the oldest living person after Gertrude Weaver's death on 6 April 2015, and held the title until dying on 17 June 2015, passing the title to Susannah Mushatt Jones.

Jeralean L. Kurtz was born on 23 May 1899 in Montrose, Georgia, to Samuel and Amelia Kurtz. She had 11 siblings. She spent her early life living on a farm, picking cotton and peanuts, and digging sweet potatoes out of the ground. In 1935, she moved to Inkster, Michigan, where she has resided ever since. In 1936, she married Alfred Talley (1893–1988). Together, they had one child, a daughter named Thelma Holloway, who was born in 1937. Jeralean and Alfred remained married for 52 years until he died on 17 October 1988, at the age of 95.

Talley never drove a car in her life. She stated that this was because she attempted to do so once, but ended up pushing the wrong pedal, causing the car to go in reverse instead of moving forward. She refused to try driving again since then.

Her daughter Thelma stated that Jeralean had remained active in her later life by making quilts, sewing dresses, and playing the slot machines at casinos. She bowled until she was 104 years old, when her legs got too weak, but she still went on annual fishing trips with her friend Michael Kinloch and his son, Tyler (who also was her godson). In May 2013, when she was 114 years old, she caught 7 catfish. At the time of her death, Talley had three grandchildren, ten great-grandchildren, and four great-great-grandchildren.

Talley was a devout Christian, and was a member of the New Jerusalem Missionary Baptist Church, the members of whom affectionately refer to her as "Mother Talley". In May 2013, they celebrated her 114th birthday with a service and a meal, as well as officially naming the church's driveway after her. Talley also received a personalized letter from President Barack Obama, who congratulated her for being "part of an extraordinary generation".

Talley lived by the motto: "Treat others the way you want to be treated". Known in the community for her wisdom and wit, she was occasionally asked for advice. She advised people to use common sense, saying, "I don't have much education, but what little sense I got, I try to use it".

On 17 June 2015, Talley died at her home after a week of hospitalization at the age of 116 years, 25 days. She had prayed not to suffer before death, and reportedly died peacefully. Regarding her great age, she had been quoted as saying "There's nothing I can do about it.". 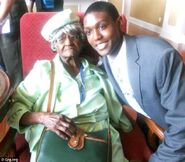