Jessie Prowse (born 7 July 1911) is an Australian supercentenarian whose age is currently unvalidated by the Gerontology Research Group (GRG). She is currently the third-oldest living undisputed person in Australia, behind Ina Reid and Alice Dobson.

Prowse was born in New South Wales, Australia on 7 July 1911. She had three children.

Prowse remembers the Attack on Sydney Harbour and the opening of the Sydney harbor bridge in the 1930s.

Prowse moved to Queensland, Australia in 1989 and later into a nursing home in Queensland. Around the same time, at the age of 103, she had two grandchildren and three great-grandchildren.

Prowse currently lives in a nursing home in Queensland, Australia at the age of 110 years, 201 days.

Jessie Prowse with her friends at the beach in 1934

Jessie Prowse at the age of 103 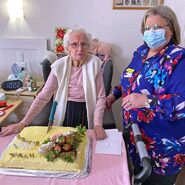