Jessie Whyte Middleton Sinclair (6 April 1910 – 15 September 2020) was a British supercentenarian whose age is currently unvalidated by the Gerontology Research Group (GRG). At the time of her death, she was the second-oldest living person in Scotland, after Janet Mackay who was born 11 days earlier.

Jessie Sinclair was born on 6 April 1910 in Forfar, Angus, Scotland. She lived in Inver, near Dunkeld, Perth and Kinross, from the age of 11. She married her husband, Willie, in 1937. During the Second World War, she worked at the canteen in Denny’s Shipyard in Dumbarton, Dumbartonshire. She recalled that one day, a bomb dropped in the middle of the canteen, but thankfully did not go off.

After returning to Inver after the war, Sinclair worked in the Royal Hotel in Dunkeld and also as an usherette at the Dunkeld picture house. When she retired, she enjoying baking and going on walks.

Sinclair moved in to retirement housing in Dunkeld, Scotland after her husband's death in 1990. During the 2012 Olympic torch relay, Sinclair held the torch when it passed through Dunkeld. In May 2015, Sinclair met with 107 year-old Alf Smith (who would later become a supercentenarian himself) and 103 year-old Willhelmina "Neen" Reid, who all shared a mutual friend.

At the time of her 109th birthday in April 2019, Sinclair had at least one living child, a daughter (Iris Taylor), one granddaughter, and one great-granddaughter. As of July 2019, she was partaking in exercise classes once every fortnight.

In April 2020, Sinclair's 110th birthday was celebrated by having some pipers perform outside her house, but they were forced to keep their distance due to the COVID-19 pandemic. She reportedly found it difficult to cope during the lockdown, with the social isolation affecting her health. In July 2020, she moved into a care home in Dunkeld. She died on 15 September 2020 at the age of 110 years, 162 days. 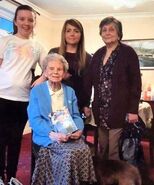 Sinclair with three generations of her family