Jewell Hutson (née Bruner; born 27 January 1911) is an American supercentenarian whose age is currently unvalidated by the Gerontology Research Group (GRG). She currently is the third-oldest known living person in Texas, behind Elizabeth Francis and Earline Andrews.

Hutson was born in Elm Flat, Texas, USA on 27 January 1911 to Charles and Mattie (née Inmon) Bruner. When she was a child the family moved to Kerens, Texas. Her family all fell ill with Spanish Flu during the 1918 pandemic, but all survived. Hutson attended North Texas State Teachers College (now known as the University of North Texas). She finished college in three years by going year-round and graduated in 1932. She began her teaching career the following year.

While in college, Hutson met her future husband, Denton Hutson, and the couple married in 1936. That year, the couple attended the Texas State Fair celebrating Texas’ 100th birthday. President Franklin D. Roosevelt was in the parade, and Denton got up close enough to take Roosevelt’s photo as the president rode past in an open car. Hutson later travelled with her husband while he was in the military.

Hutson's husband died in 1965, and she returned to Kerens, Texas in the early 1970s, where she taught the second grade at Kerens Elementary. She taught eight more years, retiring in 1979.

Hutson currently lives in Kerens, Texas, USA. In April 2020, during the COVID-19 pandemic, Hutson was interviewed about her experience during the Spanish Flu pandemic a century earlier. In January 2021, her 110th birthday was celebrated with a drive-by parade. 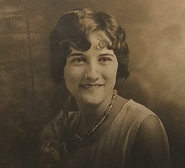 Hutson as a young woman 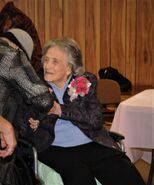 Hutson being interviewed in April 2020