Jiroemon Kimura [Japanese: 木村次郎右衛門] (né Kinjiro Miyake [Japanese: 三宅 金治郎]; 19 April 1897 – 12 June 2013) was a Japanese supercentenarian. At the age of 116 years, 54 days, he lived to be the oldest validated man ever, having surpassed Christian Mortensen's prior record of 115 years, 252 days. Kimura was recognized as the oldest living person for the last six months of his life after the death of Dina Manfredini on 17 December 2012, and became the oldest man in recorded history 11 days later. He became the last known man born in the 1800s after the death of Walter Breuning on 14 April 2011, inheriting the title of world's oldest man at the age of 113 years, 360 days, making him the oldest man to receive this record. He was the eighth person in recorded history to reach the age of 116. He was also the first man to reach the age of 116 and remains the only man to do so. He was among the very last living people to have been born in the 1800s.

Jiroemon Kimura was born as Kinjiro Miyake (三宅 金治郎) on 19 April 1897, in Kyotango, Kyoto, Japan; he was born in the fishing village of Kamiukawa as the 3rd born child of farmers Morizo and Fusa Miyake, who grew rice and vegetables. He finished school at the age of 14 as the 2nd best student in his class. Kimura worked at local post offices for 45 years, starting at the age of 17 until his retirement in 1962 at the age of 65. He also worked at a government communication unit in Korea in the 1920s. Upon his return, he married his neighbor, Yae Kimura. Since his wife's family lacked in a male heir, he changed his name to Jiroemon Kimura, becoming the 9th member of the family to have that name. He, after retiring, worked as a farmer, helping his son in farming until the age of 90. Yae died at the age of 74 in 1978.

4 of Kimura's 5 siblings lived until at least 90, and his youngest brother died at the age of 100. Kimura had 7 children (5 surviving), 14 grandchildren (13 surviving), 25 great grandchildren and 13 great-great grandchildren. Kimura was health conscious and active. According to his grandson's widow, Eiko Miyake, he was a disciplined, serious man when he was younger, and even when he drank with his brothers, he would sit straight and keep quiet. On his 114th birthday in 2011, Kimura mentioned his survival of the 1927 Kita Tango earthquake that hit Kyoto and killed over 3,000 people. Kimura was presented with a certificate from Guinness World Records Editor-in-Chief Craig Glenday, relating to Kimura's appearance in the new 2013 Guinness World Records book in October 2012. Kimura was unwell during his 116th birthday in 2013, but received many well wishes, including a video message from the Japanese prime minister Shinzō Abe.

Kimura would be woken up by his grandson's widow Eiko, everyday at 7:30am, and would help him get on his wheelchair and take him to the dining room where he would eat his breakfast. He had never suffered from any serious diseases until 2013. He would read the newspaper with a magnifying glass. He was positive and optimistic, and would be cheerful when visited by guests. He enjoyed reading newspapers and watching sumo wrestling and parliamentary debates on television. Kimura resided in Kyōtango in the Kyoto Prefecture, with his eldest son's widow, 83, and his grandson's widow Eiko Miyake, 59, in a two story wooden house he built during the 1960s. Kimura's condition started worsening in the last few months of his life. He became completely bedridden in February 2013, and was in the hospital on 11 May the same year for pneumonia. 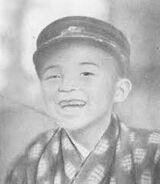 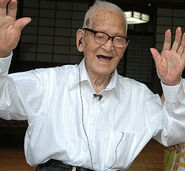