Johanna Klink (17 January 1903 – 19/20 February 2015) was a German supercentenarian who was the oldest living person in Germany since the death of Frieda Szwillus on 21 September 2014.

Johanna was born on 17 January 1903 in Siemianowitz-Laurahutte, German Empire (now Siemianowice Slaskie, Silesia Voivodeship, Poland) as one of three sisters. Her youngest sister died aged 98 in 2005. The other one, Maria Gebel (born 19 November 1906 near Rybnik) died at the age of 105 shortly before Klink's 109th birthday in 2012. She was Soltau's oldest citizen.

Klink married three times, and had one daughter called Helga (born around 1938), who preceded her in death. In 1945 Klink and her family fled to Oschatz, where she was living for the rest of her life. She retired in 1963 after being a house maid.

She moved into a nursing home in 2004 at the age of 101. She remained in a good physical and mental shape. Her claimed aim was to become older than Johannes Heesters, who was nearly one year younger than her. She finally survived him by three more years. Klink enjoyed solid plain fare (especially butter and drops of grease in her soups) but also singing and having contact to other people. It was also reported she started learning English vocabulary being a centenarian. At the age of 102 she broke her hip but recovered quickly and was able to walk with an aid until at least September 2014 when she had a fall. She was also aware of becoming Germanys oldest living person with the passing of Frieda Szwillus on 21 September 2014.

In 2015, she spent her 112th birthday in bed, being weak but mentally present. The media were not invited like the years before.

Klink died during the night from 19 to 20 February 2015 at the age of 112 years and 33 or 34 days. She is currently the sixth-oldest validated person ever in Germany, behind Maria Laqua, Hildegard Lange, Frieda Szwillus, Gertrud Henze, and Meta Berndt. 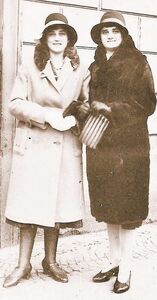 Klink as a young woman 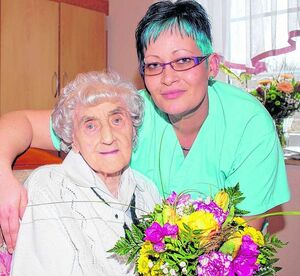