John Charles Mansfield was born in Bradley, on the outskirts of Ashbourne in Derbyshire. He would walk a four-mile round trip to school each day, whilst also working as a labourer on his family's farm.[2] As an agricultural worker, he was exempt from fighting during World War Two, something which he later said he regretted.

He later began working for the Co-Op as a coal delivery man, eventually progressing to a managerial role. He retired at the age of 75.[2] He married Beatrice in 1932, and the couple had six children.[3] After his wife's death in 1990, Mansfield lived alone in Mayfield, Staffordshire.[4]

Mansfield was a keen football fan, and supported Manchester United F.C.[3] He credited his longevity to hard work, as he would often work 20 hours at a time whilst he was employed, and was still performing manual work at the age of 98.[2] He continued to live in his own home until September 2016, when an illness forced him to move to a care home in Etwall, Derbyshire.[4]

Mansfield died on 27 November 2016, only 17 days short of his 109th birthday. He was the last surviving British man confirmed to have been born in 1907. His successors to the title of the United Kingdom's oldest living man were Bob Weighton and Alf Smith, both of whom were born on 29 March 1908.[4] 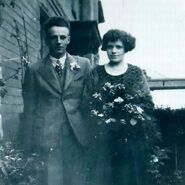 John with his wife Beatrice