Tinniswood was born on 26 August 1912 in Liverpool, Merseyside, England. Due to problems with his eyesight, Tinniswood was given an administrative role with Royal Mail during the Second World War, during which time he met his wife, Blodwen, at a dance in Liverpool. The couple married in 1942, and their only child, Susan, was born in 1943. The couple were married for 44 years until Blodwen died in 1986. Prior to his retirement in 1972, Tinniswood worked as an accountant for Shell and BP.

Tinniswood currently lives in a care home in Southport, Merseyside, England. At the time of his 107th birthday in 2019, he was able to get out of bed unassisted, read the newspaper every morning, and still managed his own finances. Tinniswood is an avid Liverpool FC fan. He has said that his secret to longevity is "eating battered fish and chips every Friday".

Following the death of 108 year-old Harry Fransman on 25 September 2020, Tinniswood became the oldest known living man in the UK according to Oldest in Britain. However, it is possible that there are older men who remain anonymous. Indian-born Fauja Singh (born 1 April 1911?) also claims to be older, but his age is not validated.

Tinniswood at the age of 106, with a 1912 copy of The Times newspaper which was printed on the day he was born 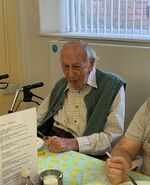 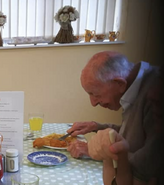