In his early 20s, Pradel Loayza served in the Jordan I Infantry Regiment and also in the Carandayti Regiment during the Chaco War.

After the Chaco War, he worked as a pharmacist and was the owner of the Mayo pharmacy.

He had two sons (one died around 2000) from his first marriage. He married Mery Penaranda de Pradel [Spanish: Peñaranda] (aged 91 in July 2020) with whom he had three children (Tesoro, Ramon and Sonia Mery).

Until before 2018, when he stopped walking by himself, he tended a garden. In 2018, he had an ocular effusion, which led him to gradually lose his sight. He also has added problems in the ear that prevent him from hearing and communicating.

As of July 2020, he had four living children, 15 grandchildren and seven great-grandchildren.

He became the oldest known living man in Bolivia, following the death of 108-year-old Ricardo Corrales Velasquez in March 2021. 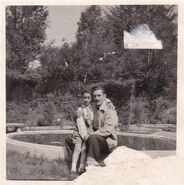 Pradel Loayza with his son (undated) 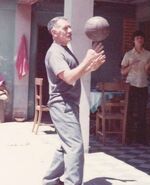 Pradel Loayza in his centenarian years