José Gregorio Brito Riera (25 May 1904? – 4 October 2015), also known "Goyo Brito", was a Venezuelan supercentenarian whose age is currently unvalidated by the Gerontology Research Group (GRG). He may have been the oldest known man ever from Venezuela before being surpassed by Juan Vicente Perez Mora in 2020.

José Gregorio Brito Riera claimed to have been born in the Torres Municipality of Venezuela on 25 May 1904 to parents Francisco Brito and Fernanda Riera. His siblings were named Tomas, Teodoro, Secundino and Guillerma. He was married to Maria Leon Raga de Brito for 72 years before her death, and had 10 children. His sister, Guillerma, lived to be 103.

Brito Riera died in Venezuela at the claimed age of 111 years, 132 days. 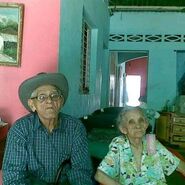 Jose Gregorio and his sister, Guillerma