Jose Martins [Portuguese: José] (born 7 March 1912) is a centenarian from Madeira, an overseas territory of Portugal. He became the oldest known living man in Portugal after the death of Alberto Andrade on 8 October 2021. However, he is not the oldest living Portuguese-born man as Jose Fernandes Morgado of Brazil is older.

Jose Martins was born in Canical, Madeira, Portugal on 7 March 1912. He worked as a shepherd, farmer, fisherman and later in the whaling company. He married at the age of 29 and had six children (including Jose Martins Jr. (born 16 November 1938)). He was widowed at the age of 82.

His son Jose Martins Jr. is a politician and priest. 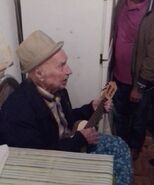