Joseph Hepworth (28 September 1867 – 17 December 1977) was a British-born American supercentenarian whose age is currently pending by the Gerontology Research Group (GRG).

Hepworth was born in Leeds, West Yorkshire, England, as one of eight children. His father ran a cloth-dying business and took advantage of Joseph as labour power. Around 1886, he emigrated to Massachusetts, United States, along with his brother. The two of them lived in Boston. Hepworth never married nor had children.

Around 1916, Hepworth moved to San Diego, California, where he lived for the remainder of his life. At the time of his 109th birthday, he stated that he regretted having moved to the USA. The key to his long life was, according to himself, having parents with good genetics. He died on 17 December 1977 at the age of 110 years, 80 days. 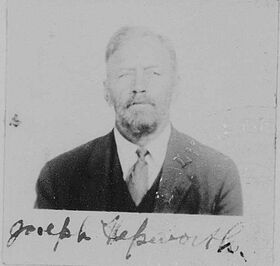