Jozsef Szuchar [Hungarian: Szuchár József; Slovakian: Jozef Suchár] (16 February 1857 – 11 August 1967) was a Czechoslovakian supercentenarian who is currently unvalidated. At the time of his death, he may have been the second-oldest living man in Europe and the world after John Mosley Turner. He was born and died in present-day Slovakia.

Suchár was born in the village of Lemes, Austria-Hungary (now Lemešany, Slovakia), on 16 February 1857. As a teenager, he moved near to Eperjes (now Prešov). He first worked in a salt mine there. After that, he worked as a stonemason in different cities of Europe, such as Budapest and Bucharest. From 1890 until his retirement in 1920, he worked at the state railways. He participated in the foundation of the Slovak Social Democratic Party.

Suchár first married to Karolina Ferencz in 1882. However, she died shortly after. He married a second time to Mária Schlosser in 1888. Suchár had six children and outlived three of them.

Suchár was still active as a centenarian, participating in daily tasks around the house. At the age of 101 in the late 1950s, when the first satellites were made, he said when he was young, people never thought humanity could reach that far, and he admired Soviet space technology. When he was age 109, he complained that he had not got the televison yet that he had asked for his 105th birthday in 1962.

Suchár's daughter, Mária, who was age 76 when her father became a supercentenarian, took care of him in his last years. He never had any serious health problems. At the age of 108, he fell down the stairs at his house, but recovered quickly. As he was approaching 110, he recieved many letters from all around the globe.

He died in Prešov, Czechoslovakia, on 11 August 1967, at the age of 110 years, 176 days. At that time, he had three living daughters, six grandchildren, and 13 great-grandchildren. After his death, then-109-year-old Marie Bernatkova became the oldest living person in Czechoslovakia, who later became the WOP. 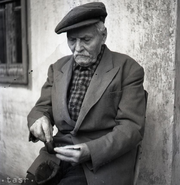 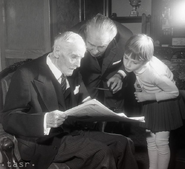 Suchár at the age of 110 with a grandson and a great-granddaughter.