Juan Escribano was born in Utuado, Puerto Rico on 24 November 1910. He married Herminia Vaquerin Franquis on 11 August 1937. The couple had 10 children. He worked as a poultry farmer and beekeeper to support his family.

On 24 November 2020, he became a Supercentenarian.

Escribano became the oldest living person in Puerto Rico following the death of 113-year-old Emilio Flores Marquez on 12 August 2021. He is also the fourth-oldest Puerto Rican man ever. 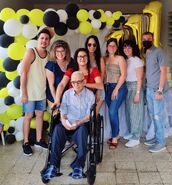 On his 111th birthday in 2021, approximately a week before he died.