Julie Montabord (17 April 1906 – 18 July 2019) was a French supercentenarian whose age is validated by the Gerontology Research Group. She lived in the French overseas territory of Martinique.

Julie Montabord was born in Le Vauclin, Martinique, France, on 17 April 1906. Her mother was a validated supercentenarian as well: Felicite Jandia (1881–1992), just the second known parent-child supercentenarian pair in history and the pair recordholder for the highest combined parent-child age. She travelled to Saint-Pierre, Martinique at the age of 20. She worked in Saint-Pierre as a manager for 17 years. After that, she moved to south France where she worked as a housekeeper. She had one son, Raymond.

Julie Montabord in her 40s. 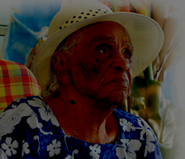