Kane Tanaka [Japanese: 田中カ子] (née Ota; 2 January 1903 – 19 April 2022) was a Japanese supercentenarian who, at the age of 119 years, 107 days, is the second-oldest person in recorded history whose age is validated by the Gerontology Research Group (GRG), behind only Jeanne Calment of France, who was over three years older than her.

At the time of her death, Tanaka was recognized by Guinness World Records as being the oldest validated living person in the world since the death of Chiyo Miyako on 22 July 2018. Since surpassing the final age of Nabi Tajima in September 2020, Tanaka has held the record as the longest-lived Japanese person of all-time whose age has been validated by the GRG.

In January 2022, Tanaka became only the third validated person on record to reach the age of 119, and the first to do so since Sarah Knauss in September 1999. On 10 April 2022, just nine days before her death, Tanaka surpassed Knauss’s final age of 119 years, 97 days to become the second-oldest validated person in recorded history.

Kane Tanaka was born prematurely on 2 January 1903 in the village of Wajiro (now part of the city of Fukuoka), Fukuoka Prefecture, Japan. She was the seventh of either eight or nine children (sources differ) born to Kumakichi and Kuma Ota. Tanaka and her family claimed that she was actually born on 26 December 1902 and that her parents delayed the process of filing the report for a week because they weren't sure if she would survive.

During World War II, Tanaka worked in her family's store, Tanaka Mochiya, selling rice cakes and noodles. Her son Nobuo was captured by the Soviets, but was released in 1947. After the war, Tanaka converted to Christianity under the influence of pastors stationed in Japan by the United States military. She continued to work in the store before retiring at the age of 63. To celebrate their 50th wedding anniversary in 1972, Tanaka and her husband travelled to the United States, where she has family, and they visited Disneyland.

Tanaka's husband died in 1993 after 71 years of marriage. At the age of 90, Tanaka underwent an operation for cataracts, and at the age of 103, she survived a bout of colon cancer, also having to undergo surgery. When she was 107, her son wrote a book about her life and longevity.

Tanaka enjoyed calligraphy, writing poetry, playing Othello and doing math problems. She also enjoyed eating chocolate, and drinking Coca-Cola and Oronamin C. Tanaka stated that she had wanted to live to the age of 120. She attributed her longevity to her faith in God.

From 2005 until her death in April 2022, Tanaka had lived in a nursing home in Fukuoka prefecture, Japan. When she was 116, it was reported that she could get around with the help of a walker. In January 2020, Tanaka celebrated her 117th birthday with family and friends at her nursing home. However, in January 2021, she was not able to celebrate her 118th birthday in the same manner due to the COVID-19 pandemic.

In March 2021, it was reported by her relative on social media that Tanaka had fallen ill shortly after turning 118, but had successfully recovered. In a February 2021 photo, Tanaka was pictured wearing an oxygen tube.

Tanaka was scheduled to carry the Olympic torch during the delayed 2020 Tokyo Olympics torch relay when the flame passed through Shime, Fukuoka, on 11 May 2021. It was expected that Tanaka's family would push her in a wheelchair for most of her 100-metre leg, but she may have walked the final few steps before passing the torch to the next runner. However, due to the rise of COVID-19 cases in Japan, it was decided that it would not be safe for this to happen.

Around September 2021, Tanaka received the COVID-19 vaccine, making her the oldest validated person to get vaccinated against the disease.

On 13 April 2022, just six days before Tanaka’s death, it was reported by her family on Twitter that she had repeatedly been in and out of the hospital, but despite her health declining, she still enjoyed eating chocolate, and drinking Coca-Cola and Oronamin C.

On 9 March 2019, Tanaka was officially presented with the "World's Oldest Living Person" and "World's Oldest Living Woman" titles by Guinness World Records. On 15 December 2019, she became one of the ten oldest validated people ever recorded after surpassing Maria Capovilla's final age of 116 years, 347 days.

On 2 January 2020, Tanaka celebrated her 117th birthday, making her the fourth Japanese person to do so. Upon reaching the age of 117 years, 261 days on 19 September 2020, Tanaka broke Nabi Tajima's record to become the longest-lived validated Japanese person ever recorded. She also became the third-oldest validated human being of all-time, after Jeanne Calment and Sarah Knauss.

On 2 January 2021, Tanaka celebrated her 118th birthday; this was only the third time in history that a person has verifiably reached the age of 118, and the first such birthday since September 1998.

On 2 January 2022, Tanaka celebrated her 119th birthday, making her only the third validated person in history to reach this age, and the first such birthday since September 1999.

Tanaka, along with Lucile Randon, outlived every supercentenarian (excluding longevity claimants) born in 1905, following the death of Antonia da Santa Cruz of Brazil on 23 January 2022.

Tanaka (front row, center) with her brothers and sisters 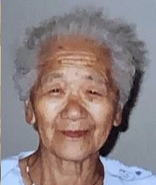 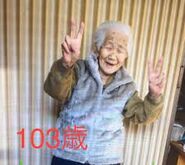 Tanaka with her family in the 2000s 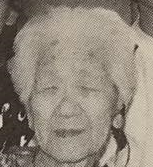 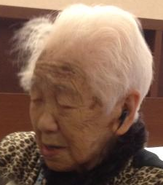 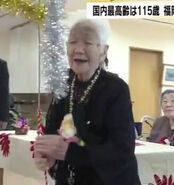 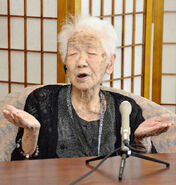 Tanaka (aged 116) using a walker on 9 March 2019, just moments before being recognized by Guinness World Records 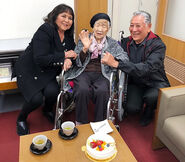 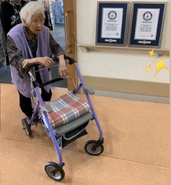 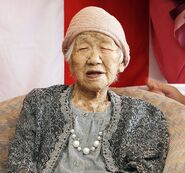 Tanaka (aged 117) in September 2020, after becoming Japan’s oldest person ever 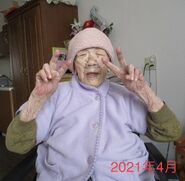