Katherine Anderson (31 July 1913 – 6 December 2020) was an American centenarian who was one of the oldest victims of the COVID-19 pandemic.

Anderson was born on 31 July 1913 in Cortland, Illinois. She grew up on her family’s farm with her two sisters, who lived to the ages of 100 and 102. She attended a one-room schoolhouse, but dropped out in the eighth grade due to the economic pressures of the Great Depression.

Anderson and her husband, Floyd, were married for 56 years prior to his death in 1992. The couple had two children, Charlene and Kenneth. Anderson became a clerk at Gibson Cleaners when her youngest child went to college, and she continued working there for 30 years. She also did sewing and laundry for other people, as well as for her own family. She reportedly enjoyed word puzzles, bird watching, and sightseeing.

In May 2017, then aged 103, Anderson moved into an assisted living facility in Greenville, Tennessee in order to be closer to her daughter. Her 104th birthday celebration in July 2017 was attended by State Rep. David Hawk and Greene County Sheriff Pat Hankins. At the time, Anderson was reported to be in good health and was still able to dance.

Anderson died from complications due to COVID-19 on 6 December 2020 at the age of 107 years, 128 days, making her one of the oldest victims of the coronavirus pandemic. At the time of her death, she had three grandchildren and three great-grandchildren.

Anderson at the age of 18 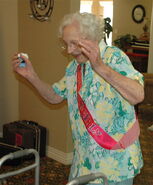 Anderson dancing at her 104th birthday party in 2017