Katsumi Ando was born in Kiinagashima, Mie Prefecture, Japan on 2 February 1909. She later moved to Tsubaiso-cho. She enjoys sweet buns and cherishes spending time with her grandchildren. 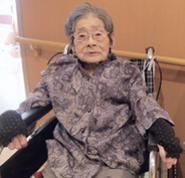