Kineko Takahashi (Japanese: 高橋きね子; 10 July 1909 – 27 February 2022) was a Japanese supercentenarian who is currently unvalidated by the Gerontology Research Group (GRG).

Kineko Takahashi was born in Komatsu, Yamoto, Higashimatsushima, Miyagi Prefecture, Japan on 10 July 1909. She married a farmer, and had six sons and four daughters. They later gave her 14 grandchildren, 16 great-grandchildren, and 17 great-great-grandchildren (as of September 2020). She worked in the fields, and took care of cows even as a centenarian.

On her 100th birthday in 2009, Takahashi was visited by the deputee mayor of Higashimatsushima. She was still doing her daily routine alone, hadn't major health problems, and did the dance "Cousin Bushi" [Japanese: おいとこ節].

At the age of 103, Takahashi broke one of her bones, and became bedridden. In July 2019, she celebrated her 110th birthday.

Kineko Takahashi died due to senility in Higashimatsushima, Miyagi Prefecture, Japan, on 27 February 2022 at the age of 112 years, 232 days. 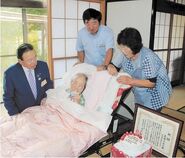