Kura Bingo was born in Japan on 20 October 1905. At the age of 102 she could no longer walk and used a wheelchair. At the age of 108 (almost 109) she became bedridden and remained that way for the rest of her life. In September 2016, she was reported as the oldest living person in Nara Prefecture, and has been confirmed as such for four consecutive years. She was the third-oldest living validated person in Japan. She was also the oldest person ever to have died in Nara Prefecture. 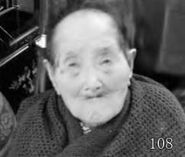