Lajosne Buzaky (née Margit Harangi) [Hungarian: Buzáky Lajosné Harangi Margit] (2 May 1898 – c. 13 September 2007) was a Hungarian centenarian. At the time of her death, she was to oldest living person in the country.

Margit was born in Bihardancsháza, Austria-Hungary (present-day Hungary) on 2 May 1898. She got married to Lajos Rezső Buzáky in the early 1920s and moved to the city of Debrecen after the wedding. She worked as a housewife in all her life. She had to suffer tragedies during her lifetime, although she herself was seldom sick. Her husband died in Austria during WWII.

At age 100, it was reported that although Margit’s hearing and eyesight had got worse, she was mentally still very healthy. She would listen to the radio and lot and help in easy kitchen tasks. On her 108th birthday it was stated that she still had a good sense of humour and a great appetite. She did not take any medicine, and would sing psalms every evening with her daughter, whom she was living with. She had two daughters, one grandchild and two great-grandsons.

Margit became the oldest living person in Hungary upon Gergely Molnar’s death in March 2006. She died in Debrecen, Hajdú-Bihar, Hungary around 13 September 2007 at the age of 109 years, c.134 days. 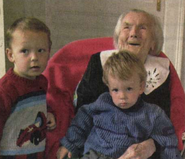