Woosley Scales was born as Laura Woolsey Lord in Hanover, New Hampshire as the daughter of John and Emma Pomeroy Lord.

Laura graduated from the Smith College, Massachusetts in 1901 with a Bachelor of Literature and married Robert Scales in Hanover, New Hampshire 6 October 1908. The marriage was brief as Robert died in 1912, without them having had any children. She then worked at the Boston Museum of Arts for a few years before being appointed as Dean of Women at the Carnegie Institute of Technology in Pittsburgh, Pennsylvania in 1920. Two years later she left that position and became Warden at the Smith College. In 1922 she also published a book titled "Boys of the Ages". In 1931 she received an Honorary Degree of Literature and in 1936 one of the new dormitories of the Smith College was named the Laura Scales House. In 1939 she became an Honorary Doctor of Literature. 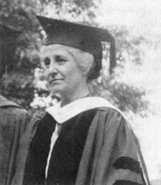