Rouget knew her husband, Olivier Rouget, since childhood: "His parents lived in the neighbouring farm and we went in the same school..." She married him in 1934, and began to work in the fields. She looked after sheeps, and "even helped to carry hay in the attic". The couple had two daughters, Gilberte (born in 1937) and Gilbert (born in 1952).

In 1950, the family moved from Sennevieres. Rouget remembers: "It's my husband who had had enough of agriculture, and we moved in 1950 in Azay-sur-Indre, hired in a bourgeois house." They stayed there for 28 years and a half.

At retirement, the couple bought a house next the fields of Tauxigny-Saint-Bauld. They repaired the house, and made a garden where there were vines. Sometimes, they traveled to Loches. Rouget took up sewing again for her grandchildren. She was widowed in 2002

On her 100th birthday, Rouget was visited by the mayor of Tauxigny, Andre Audurier, the mayor of Sennevieres, Caroline Krier, and the honorary mayor of Tauxigny, Claudette Oligo. She received a sketch of 100 roses. She was reported to be alert, to have comeback, and to daily go taking her newspapers in the center of the town. Rouget said she was surprised to have reached this age. At the time, she had five grandchildren and one great-grandchild (Lucas).

At the age of 107, Rouget was living independently in her house. Her daughter Gilberte and her neighbour Robert ofter went seeing her. Some days before her birthday, she began to make deliver her meals. She watches news and documentaries at television, and reads the newspapers, although her eyesight deteriorated a bit. On her 108th birthday, Rouget began to have home help for some hours.

In October 2019, Rouget broke her femur, and went to hospital, then in the reeducation center of Puy-Gibault in Loches. In February 2020, she moved to the nursing home L'Abbatiale in Cormery. For her 109th birthday, the nursing home organised a party in secret to make her a surprise, and organised the come of her daughter.

Rouget celebrated her 110th birthday in May 2021 with her relatives and the staff of the nursing home. She was visited by Caroline Krier and Jean-Louis Robin, the mayor of Tauxigny, who recalled: "She did her shopping herself, and didn't hesitate to invite me for the aperitif, without the right of refusing, each time I passed in front of her house." 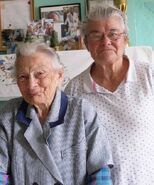 Lea Rouget in September 2018, aged 107, with her daughter Gilberte. 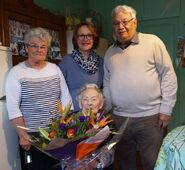 Lea Rouget on her 108th birthday.