Leila Denmark (née Daughtry; 1 February 1898 – 1 April 2012) was an American pediatrician and supercentenarian, who became the oldest practicing pediatrician in the world, retiring at the age of 103 in May 2001. She at the time of her death was at the age of 114 years, 60 days, the 5th-oldest living person in the world and the 3rd-oldest in the United States. Leila is the oldest person ever known for reasons other than longevity.

Born in Portal, Georgia, Leila Alice Daughtry was the oldest of 12 children. She attended Tift College in Forsyth, Georgia, where she trained to be a teacher, but decided to attend medical school when her fiance, John E. Denmark, was posted to Java, Indonesia by the U.S. Department of State and no wives were allowed. She was the only woman in the 1928 graduating class of the Medical College of Georgia, and married soon after graduation. Denmark is credited as co-developer of the pertussis (whooping cough) vaccine in the 1920s–1930s.

Following graduation, she accepted a residency at Grady Memorial Hospital in Atlanta, Georgia and moved to the Morningside Heights neighborhood with her husband. Denmark was the first physician on staff at Henrietta Eggleston Hospital, a pediatric hospital on the Emory University campus, when it opened. In private practice, she saw patients in a clinic at her home and devoted a substantial amount of her professional time to charity. She never refused a referral from the public health department. On 9 March 2000, the Georgia General Assembly honored her in a resolution.

Denmark outlined her views on child-rearing in her book Every Child Should Have A Chance, published in 1971. She was among the first doctors to object to cigarette smoking around children, and drug use in pregnant women. She believes that drinking cow's milk is harmful, and that children (and adults) should eat fruit instead of drinking fruit juices, and drink only water. On her 100th birthday in 1998, she refused cake due to the fact that there was too much sugar in it.

Denmark lived in Alpharetta, Georgia, until age 106, when she moved to Athens, Georgia to live with her daughter Mary Hutcherson. On 1 February 2008, Leila Denmark celebrated her 110th birthday attaining supercentenarian status.

Leila Denmark on her wedding day.

Leila Denmark as an older woman. 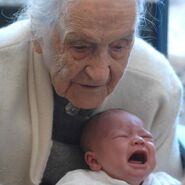 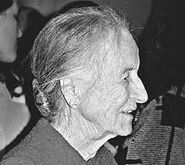