Evalena "Lena" Marie McLachlan (née Hussey; 13 January 1886 – 14 May 1997) was an American supercentenarian whose age has been validated by the Gerontology Research Group (GRG). She was one of the oldest known people in the U.S. state of California at the time of her death.

McLachlan was born in Corralitos, California, USA, on 13 January 1886. She was the eldest daughter of Casper Richard Hussey and Canadian-born Octavia (née Lanthier) Hussey. She had two younger siblings, Alice and Leroy. Their mother later remarried to Swedish-born Andrew Fostrom in the 1930s.

At the time of her 110th birthday in 1996, McLachlan reportedly still went shopping, worked in her garden, and read the newspaper every day. She died on 14 May 1997 in Burlingame, California, USA, at the age of 111 years, 121 days. Her age was validated by the Kestenbaum Study and validated by the GRG on 10 August 2002.

McLachlan at the age of 110 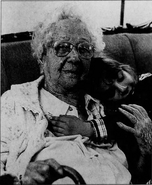 McLachlan at the age of 111