Li Chun claimed to be born on 22 April 1896 (17 March by lunar calendar) in Hekou, Luhe County, Shanwei, Guangdong, Qing dynasty (now China), in a poor Hakka family. According to her memory (although it can be a joke) –, she was beautiful when she was young, and because a farmer saw her beauty, he fell of his cow and broke his hand.

Chun had three sons and one daughter. She said them that they must remember the word "person" [Chinese: 人] and serve people forever. She was widowed around 1936, and struggled to feed her children; the family was so poor that they hadn't rice to eat. Chun fed her children with boiled potatoes, and drive her cattle all day long while feeding herself with water and dryed radishes. When she had guests, she let them eating, and later, she let her children eating. Her grandson will later say: "She always said that no matter her poverty, she couldn't have shame in front of the others."

Chun's three sons went to school. The oldest, Xie Gengzai [Chinese: 谢庚在], became a farmer in his home town. The youngest, Xie Fei [Chinese: 谢非] (1932-1999), surnamed Anxiang [Chinese: 阿香] by her mother, became a politician and a member of the Chinese Communist Party: although he lied to her mother by saying he went to work, he later tell her the truth, and Chun supported him. He moved from Lufeng to Guangzhou in 1960, and Chun and her family followed him.

In her 90s, Chun began to lost her teeth, but even when she hadn't them anymore, she kept on brushing her gums and washing her mouth. In her centenarian years, she cooked for herself on her own. At the end of 2008, she needed the help of a wheelchair (although she could walk with leaning on a chair with her hands).

A great party was held for Chun's 112th birthday. She was visited by Lin Xiong [Chinese: 林雄], one of the 9 permanent members of Guangdong's Provincial Committee of the Chinese Communist Party, who offered her flowers; by Tang Bingquan [Chinese: 汤炳权], the vice-president of Guangdong's Provincial Committee of the Chinese People's Political Consultative Conference; and was also congratulated by Cai Dongshi [Chinese: 蔡东士], a member of the 11th National Committee of Chinese People's Political Consultative Conference, for "having raised a good son of people". She also received some of her dead son's colleagues. At that time, she lived with her grandson (Xie Fei's son), Xie Zhenwen [Chinese: 谢振文].

At the age of 112, Chun was reported to be lucid, and said herself she was in very good health, and could eat the half of a rice bowl and drink some soup for lunch and dinner, and cereals and eggs at breakfast. She thanks her family for having improved her life conditions: "Thanks to all. Now, I'm in good health. I can eat and sleep." She slept 7 hours during the night and 3 hours during the day. Chun claimed her longevity secret was to "eat lightly, to not always have big meats and big fishes for a meal, it's unhealthy."

Although Chun never learnt to read, she asks her family to read her newspapers during the day, and she watches television reports on the night, in order to be aware of what happens in the world and to not be disconnected of the society. Actually, she hoped to see her son Xu Fei in television, because according to her grandson, she never learnt the death of her son: it was because Fei was afraid that his then 103-year-old mother doesn't hold on; Chun even received presents claimed to be from Fei on each Chinese New Year.

Following the death of Zeng Yasi on 30 May 2008, she became the oldest living person in Guangzhou.

She was the third-oldest known living person in China at the time of her death, after Wen Yangshi and Li Sifen. 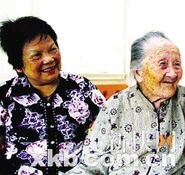 Li Chun with her second daughter-in-law.