Sarah Lilian Priest (née Lloyd; 7 November 1908 – 6 June 2021) was a British supercentenarian who was the oldest living person in the United Kingdom at the time of her death, as well as the last surviving British person born in 1908. Her age is currently unvalidated by the Gerontology Research Group.

Priest was born on 7 November 1908 in Tredegar, Monmouthshire, Wales. She moved to Bournemouth, Dorset, England at the age of 18 to work in a friend’s bed and breakfast for six months. Priest and her husband, Arthur, did a lot of travelling, and they had at least one child, Wendy. Priest enjoyed playing the piano and singing.

Priest's sister, Gwen Moore (born 27 November 1911), lives in Bongaree, Queensland, Australia, at the age of 110 years, 54 days, making them one of the oldest oldest pairs of siblings.

By the age of 106, Priest was no longer able to play piano or sing, but could still remember all the words to the songs she used to sing. In her later life, Priest lived in a retirement home in Swanage, Dorset, England.

Priest became the oldest living person in the United Kingdom following the death of Joan Hocquard on 24 October 2020. The following month, she celebrated her 112th birthday, but was not able to have any visitors due to the coronavirus pandemic. However, her daughter was able to see her from a distance through a door. On 19 January 2021, at the age 112, Priest received her first dose of the Oxford–AstraZeneca vaccine, making her one of oldest people to receive the COVID-19 vaccine.

Priest on her wedding day 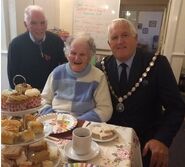